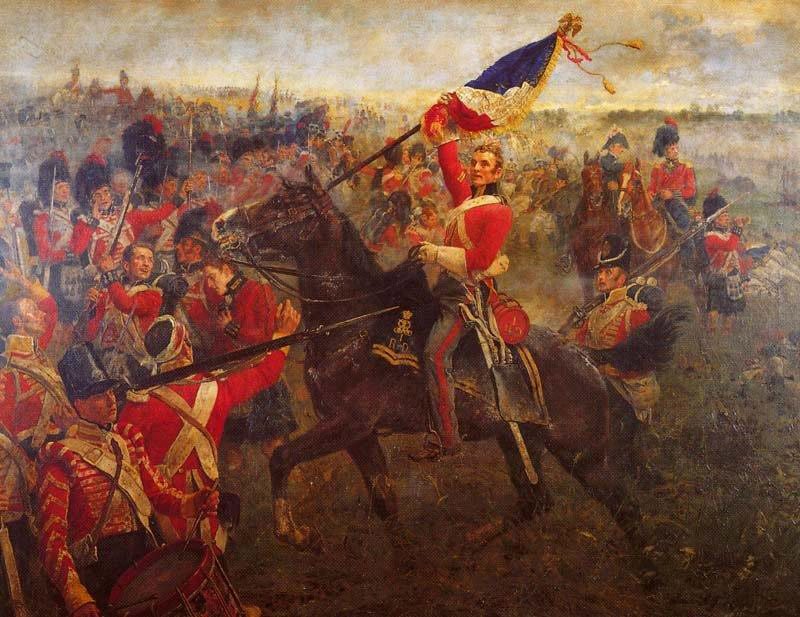 The day on which the flag and eagle was taken was the eighteenth of June in our first charge of that day (about half past eleven in the forenoon) on the second column of the Invincibles. The officer who carried it and I had a short contest for it; he thrust for my groin, I parried it off and cut him through the head; in a short time after whilst contriving how to carry the eagle (by folding the flag round my bridle arm and dragging the pole on the ground) and follow my regiment I heard a lancer coming behind me; I wheeled round to face him and in the act of doing so he threw his lance at me which I threw off to my right with my sword and cut him from the chin upwards through the teeth. His lance merely grazed the skin on my right side which bled a good deal but was well very soon. I was next attacked by a foot soldier who after firing at me, charged me with the bayonet; I parried it and cut him down through the head; this finished the contest for the eagle which I was ordered by General Ponsonby to carry to the rear.

All that I know respecting the other eagle captured is, that it was taken by the 1st Royal Dragoons, but by what individual don’t know. It belonged to the 105th Regiment I believe and was carried at Brussels by Corporal Stiles of the 1st Royal Dragoons. I am not aware whether it had a flag attached to it or not. About two or three o’clock in the afternoon of the 18th I was ordered by an officer of the 42nd to take the eagle to Brussels. General Ponsonby’s aide de camp overtook me and passed me on the road and informed me first that the general was killed.