Hougoumont Farm and the Battle of Waterloo »

The Ruins of Hougoumont

Before the plans were finalised for the Restoration of Hougoumont farm; the architects Peter Inskip + Peter Jenkins of London, produced a full survey of the property and tender for the works in December 2013. Along with the tender documents, they also produced two large addenda which contain a huge amount of fascinating historical material regarding the history of the farm and chateau during the battle and since.

Volume II consists of extracts from memoirs of soldiers who were present during the Battle of Waterloo, with regard to Hougoumont; this is further supplemented by witness statements from many of the visitors who visited the battlefield in the years after the battle.

Volume III consists of a huge collection of images of Hougoumont farm and chateau, consisting of sketches and paintings by artists who visited the scene very soon after the battle and who portrayed the buildings as they were at the time; this is supplemented by a huge number of Victorian photographs of the remains of the farm and chateau and which help to show the changes in the site since the battle.

Both volumes may be viewed via the links below. 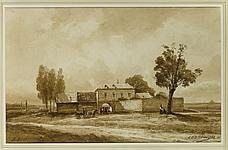