Introduction
By Russ / 3 years ago 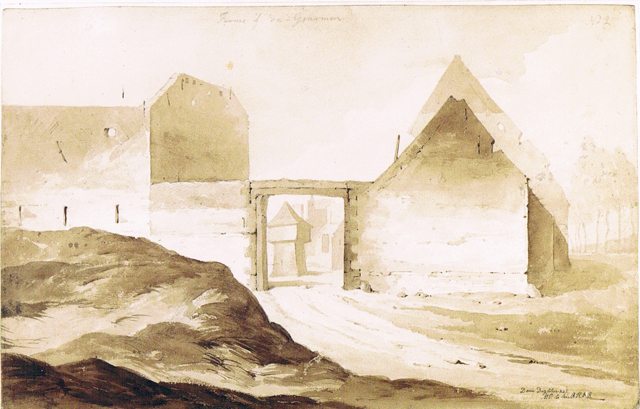 THE FOUNDING OF PROJECT HOUGOUMONT

The restoration of Hougoumont is the achievement of a group of dedicated individuals, mostly volunteers, working in Belgium and the United Kingdom.

The story begins in 2003 when the last farm tenant died and Hougoumont was put up for sale. The farmstead and 10.5 hectares were bought by the Intercommunale Bataille de Waterloo 1815, including all the municipalities on which the battlefield stands, with the intention of repairing the decaying buildings and opening them to the public in time for the bicentenary of the battle in 2015. The Intercommunale rapidly initiated the process of obtaining restoration permits and the appropriate available Belgian subsidies. It was clear to all however that additional funding would be needed and that private initiatives would be required.

It was with this concern in mind that Steve Stanton, a Waterloo enthusiast, launched the beginnings of Project Hougoumont in the UK in 2007. Having noticed disturbing advertisements on eBay for the sale of Hougoumont bricks, he contacted the eminent military historian Richard Holmes who did not take much persuading to get on board. Within an hour or so, Project Hougoumont was born.

The purpose was to raise money for its restoration and Project Hougoumont Ltd was registered as a UK charity with Alice Berkeley, Richard Holmes and Barry Van Danzig as trustees. As the author of a book on Waterloo and a successful businessman with experience in the area of contracts, Barry Van Danzig was asked to become chief executive.

In 2008, the Duke of Wellington invited Count Georges Jacobs de Hagen, a man of distinction and influence in Belgian public life, to lead the project in Belgium with three objectives: to facilitate the process of obtaining a building permit and statutory subsidies, to raise the necessary funds and to include a monument to the British army.

Soon afterwards, Countess Nathalie du Parc Locmaria, a popular and energetic councillor for the commune of Braine L’Alleud, was appointed President of the Intercommunale. She agreed to join a committee chaired by Georges Jacobs, whose members included Jonathan Brenton, the British Ambassador, Baron Bernard Snoy, President of the Waterloo Committee for Historical Studies, and Michael Mitchell, an Anglo-Belgian descendant of a Waterloo soldier.

The Duke of Wellington, Prince Charles Bonaparte and Prince Nikolaus Blücher, descendants of the three commanders, have graciously consented to become patrons of Project Hougoumont and to celebrate the restoration with a symbolic handshake at the Opening Ceremony on 17 June 2015.

In 2011 when Richard Holmes died after a long illness, a new UK appeal committee was formed with the addition of David Colvin, Annie Tatham, Pen Milburn, David Martin and Samantha Wyndham.

The following year they were joined by Martin Drury, just retired as chairman of the Landmark Trust, who agreed to chair the committee and lend his long experience in fundraising and conservation to the project. Liaison between the Belgian and British committee was ensured by the appointment of Michael Mitchell to sit on both committees. Strong teams were now in place both in Belgium and the United Kingdom.

The support from the Foreign Office was fundamental to the success of the project and a huge debt of gratitude is owed to the Ambassadors and in particular Katrina Johnson our intrepid contact at the FCO Belgium.

During the 1990s, David Colvin was British Ambassador to Belgium and also a patron of the Waterloo Committee. His experience and knowledge of early attempts to improve the battlefield have helped us significantly throughout the development of the renovation project. In October 2013 Alex Spofforth joined Project Hougoumont UK as company secretary. His professional experience as an accountant and his cool head have been invaluable to the project, not least in administering the UK government grant in close collaboration with Katrina Johnson, Deputy Head of Mission at the British Embassy in Brussels. Justin Davies, a retired officer of the Grenadier Guards also volunteered his help in Belgium and has worked tirelessly to enlist the support of the Household Division and liaise with the British Ambassador, Alison Rose, and her team.

The total funds needed to restore Hougoumont and install the scenography and erect a Monument to the British Army amounted to €3.8m.

Georges Jacobs and his Belgian committee raised €1.1million in addition to Walloon government subsidies of €990.000. Private and corporate funding in Belgium was channelled through the King Baudouin Foundation. A particularly apposite partner was Project Hougoumont’s major corporate sponsor, Breguet, the famous firm of Swiss watch-makers whose customers included Wellington, Napoleon and several of his marshals, and the main protagonists at the Congress of Vienna. Other important corporate sponsors included Semlex, AG Real Estate, Euroclear, BNP Paribas Fortis and the final and very welcome donor was the Royal Netherlands Army.

The Dutch (or Nassau) troops who fought at Hougoumont are often forgotten but there were, in fact, 800 of them and 300 Hanoverian light infantry present who should be honoured. The inclusion of the Dutch historian, Dr. C M Schulten, on the scenography committee was a great help in ensuring the accurate portrayal of these gallant allies.

In the United Kingdom the timeliness and special attraction of the cause won handsome donations from charitable trusts and generous individuals. Outstanding among the latter was Barry Van Danzig who offered to fund the monument for which a permit had now been obtained.

The UK campaign got off to a good start with the ‘Chosen Men and Women’ fund- raising campaign. The term ‘Chosen Men’ refers to the practice in the Army at the time of having chosen men to carry out specific tasks, usually the most hazardous; they were therefore the elite of the unit. The 430 Chosen men and women who supported the Hougoumont restoration made small, medium and large donations and have raised to date more than £65,000. Their names are listed on the Roll of honour to recognise their achievement.

A series of paintings by Chris Collingwood was commissioned by Steve Stanton depicting various parts of the Battle. He has generously transferred profits from the sale of prints made from the paintings that have generated funds for Project Hougoumont, and we have used them as the artistic backdrop in our publications.

In May 2012 Ambassador Jonathan Brenton arranged for the Chancellor of the Exchequer, George Osborne, to tour the battlefield with General Sir Richard Shirreff, Deputy Supreme Allied Commander Europe and the most stimulating of Waterloo guides.

At the end of that day the Chancellor met Nathalie du Parc at Hougoumont and was so moved by the desolation of the place and by her anguished appeal for help that a year later he offered a grant from the UK government of €1,500,000 to help close the funding gap. In all €2.05 million was raised in the United Kingdom.

In October 2013 the chosen contractor, Bajart, started on site under the watchful direction of Benoit Delfosse, the site-manager, and with André Dupont and Nicolas Gyömörey of the Brussels-based DDGM as architects. One of our sponsors, AG Real Estate, donated the services of an experienced project manager, Baudouin Gallez, to help control the expenditure.

To assist the Intercommunale in achieving its objective of restoring the farm, Project Hougoumont UK commissioned the London-based architects Inskip and Jenkins to draw up a Conservation Plan. A tremendous amount of research was involved and resulted in the compilation of two volumes, one of images of Hougoumont from 1815 onwards and one containing written descriptions. These can now be viewed in the Research section of this website.

This helped to satisfy the architects and authorities that the original aspect of the outer walls and south face of the Gardener’s House should be maintained and the blocked-up windows kept closed as they were at the time of the battle, and our thanks go to Martin Drury for his essential role in this process.

Members of the Wyndham family agreed to fund the replication of the famous North Gates and the repair of the gate piers in memory of their forbear, Lieutenant-Colonel Henry Wyndham, who played a leading part in the closing of the gates in 1815. The gates themselves were made in the estate yard at Petworth, home of Lord Egremont, head of the Wyndham family. Fragments of the original gates and the lock preserved in the Guards Museum were used to ensure that the new gates resembled the originals as closely as possible.

Hougoumont Farm would not have been saved without the help of our many volunteers, supporters and donors