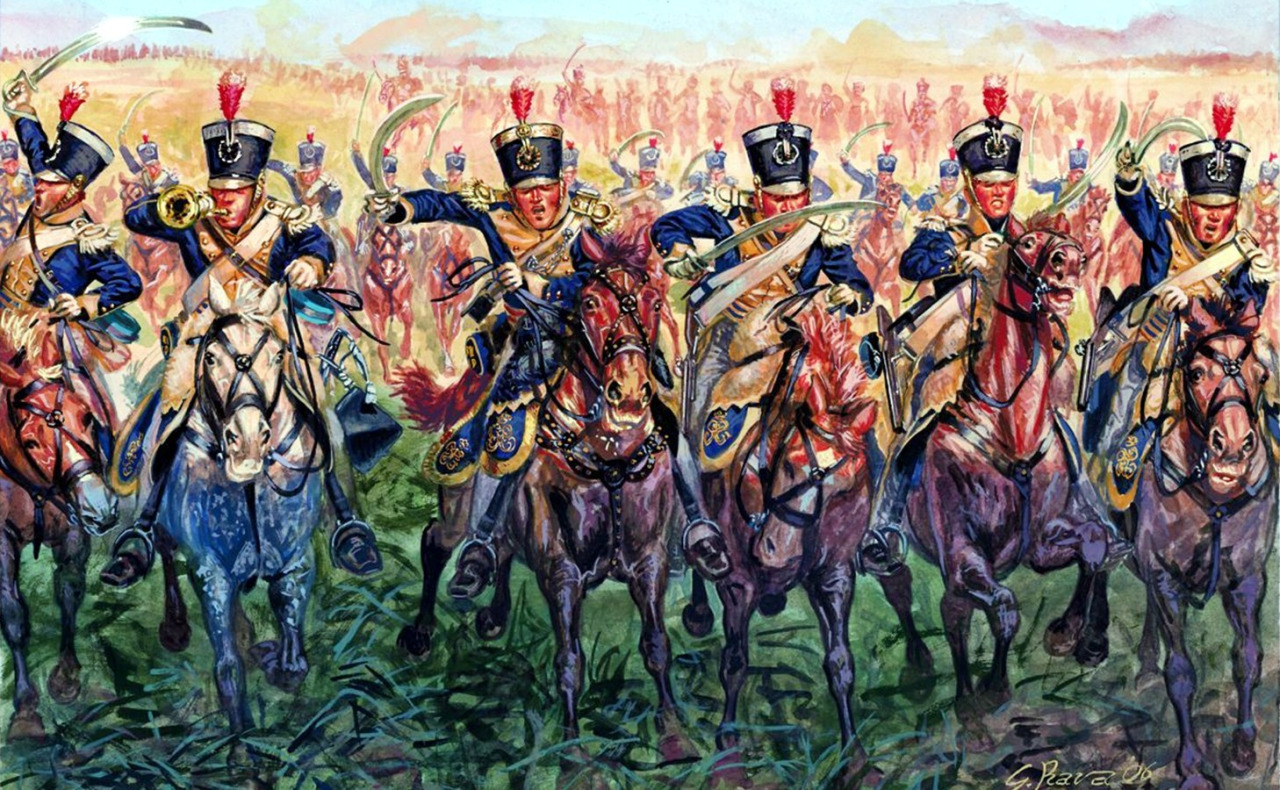 On the sixteenth of June we marched at daylight to join the army and were the first regiment of cavalry to arrive at Quatre Bras and although under fire were not called upon to do anything. The next morning showed what [a] day it had been, as the dead were seen lying as thick as possible.

On the afternoon of the 17th the 23rd were appointed as the support of the 7th Hussars who formed the rearguard at Genappe, but as Lord Uxbridge declared the light cavalry were not strong enough to oppose the French lancers 36, the Life Guards and Blues were ordered up and passed through the 23rd, made a splendid charge and having retired the 23rd became the last regiment in the rearguard. About this time the heaviest rain ever seen by men in the tropics came down. Everyone was of course saturated and the ground became impracticable for any rapid movement of cavalry. After a good deal of skirmishing the troops were quiet for the night and a night of rain it was, for in spite of the large fires the men could not get dry.

Early in the morning I was sent on picquet opposite La Haye Saint and in front of La Belle Alliance. I saw Bonaparte with my glass passing in front of his troops. Lord Uxbridge and several Staff Officers availed themselves of my glass and pronounced a very good one – some will say what became of the glass, why lost, as a youngster in those days I cared little about it.

The farmhouse of La Haye Saint was garrisoned by a regiment of German rifles. The Quartermaster, a very kind man gave me a glass of gin which upset me much as I had little or nothing to eat since the night of the 15th.

I saw the attack commence upon Hougoumont and the place in a blaze. Between twelve and one o’clock the picquet I was with was driven in. as the roads were blocked up to prevent the advance of the enemy’s artillery from coming up. The cavalry picquet were told to file through the garden of La Haye Saint, on the upper side of the road there was a gravel pit, on the top of which there was a party of the 95th, now Rifle Brigade, some of the officers told me to ride at it, when they actually drew myself and my men up it.

When having passed the men up we joined the regiment and the first thing I saw was a man and horse dead. At this time Lord Portalington was not with the regiment. He had been very ill, which the wet night did not improve, the surgeon gave him a composing draught, when he got into a farmhouse and got some sleep, and was awoke by the cannonade when he found the communication between himself and the regiment cut off.

The command now devolved upon Major Cutcliffe. We kept for a long time in close column covering the guns, and were exposed to a cross fire, but were so far in a good position as the shot and shell fell in front of our column and bounded over us did great mischief to a column of Household cavalry in our rear, who stood well.

At last we were ordered to charge and retake the guns. The excitement became very great, we drove back the cuirassiers and were ourselves driven back in turn when we passed between two square of infantry who fired upon the cuirassiers as they advanced upon us and as they broke we attacked them when the infantry cheered us and we them in return. This sort of thing lasted for some

time. I think the cuirassiers were the finest men I ever saw except the Carabineers who were picked men and wore brass cuirasses.

I remember seeing an ammunition [wagon?] that had exploded. A shell burst on it and it took fire when the horses ran away with it into the enemy’s lines and did them great damage, it was a grand sight.

When poor General Picton was killed a Staff Officer came to our regiment and got a picquet to cover a party who buried him pro tem.

We had one officer killed and six officers wounded.

The next morning a bullock was driven into our lines, when superintending the killing and cutting it up which we had for dinner and the first we had for a long time.

Very interested in the 23rd Light Dragoons as I have discovered my G/G/G/G/Dad a William King Trumpet/Major fought at Talavera & Waterloo
His Son also named William fought along side William snr at Waterloo he was a Trumpeter Both survived Waterloo
Not sure you can help me, trying to research if William Snr was captured at Talavera I have not found any info so far
Would be grateful for any pointers or comments Thank You B.W-King

Unfortunately the only way of finding out is to have someone check the records at the National Archives at Kew (you can hire people to do this for you).