The History of Hougoumont

History
Hougoumont
By Russ / 6 years ago 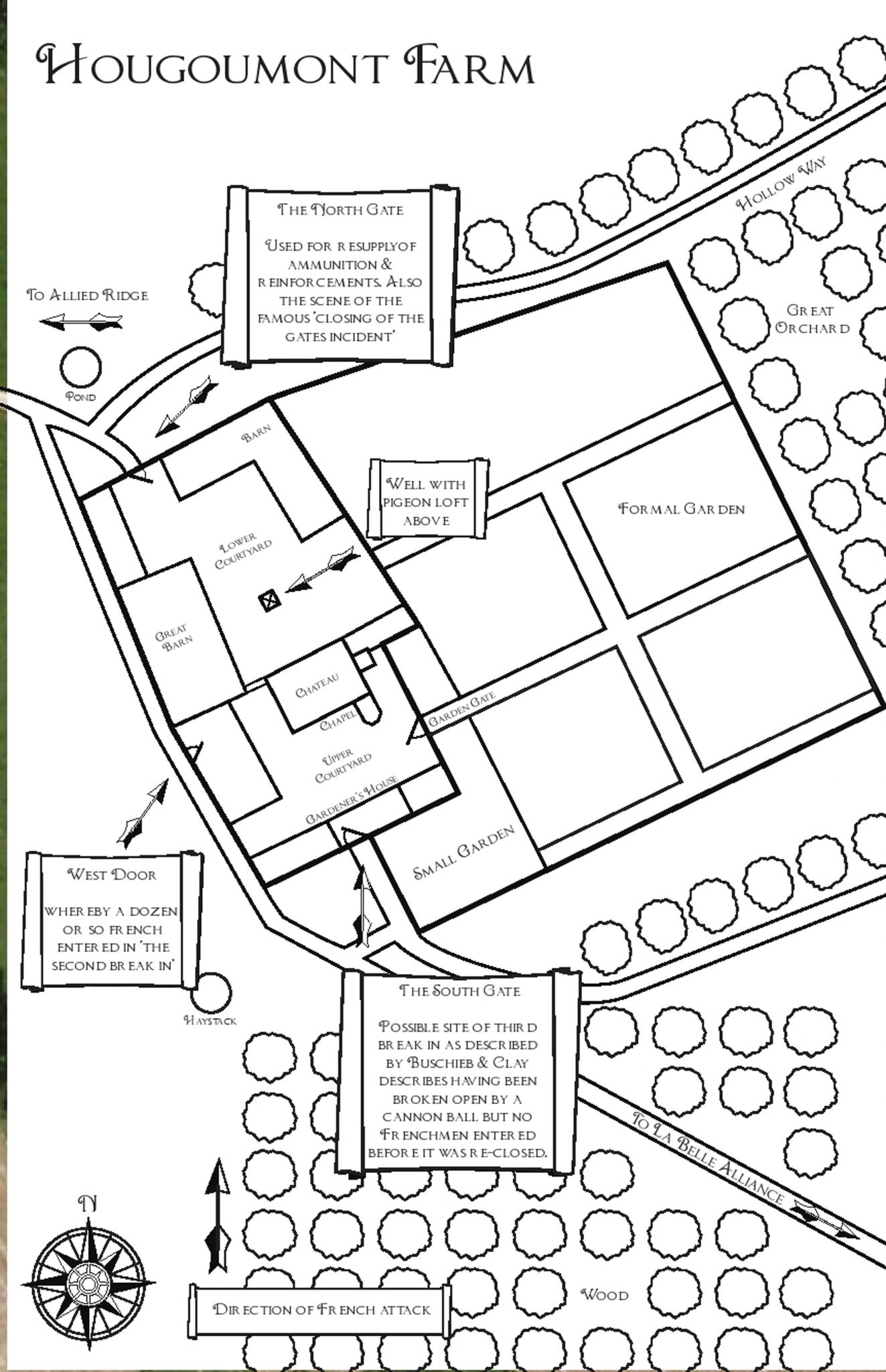 In 1815, the small chateau of Goumont was owned by the 86 year old Philippe Gouret, Chevalier de Louville, who was much too elderly to run a farm and resided peacefully in Nivelles; he therefore rented the farm complex to a tenant farmer, one Antoine Dumonceau and the adjoining chateau lay unoccupied and unfurnished. The chateau and its associated staff residencies and numerous agricultural barns and stables, formed a figure of eight shape, surrounding two distinct courtyards. With high stone walls connecting all of the buildings and surrounding the large formal gardens on its southern and eastern boundaries and its northern edge protected by a thick hedge and a sunken track or hollow way, it formed a very strong defensive position. Only four gates allowed ingress to the farm complex, restricting any attacker to assaulting one or more of these points of access. The south (or upper) gate, formed from two great wood panelled doors, secured by a wooden bar, gave access for carriages and carts into the southern (or upper) courtyard through a high archway built underneath the gardener’s house. Another large pair of wood panelled gates secured by a heavy wooden beam was to be found in the high north wall giving similar access for wheeled transport into the much larger northern (or lower) courtyard, which should be viewed as the farmyard. Within this yard was a brick draw-well topped with an ornate pigeon coop. 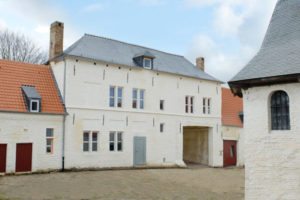 The location of Hougoumont is in low lying ground and then being fronted on its south side by an extensive wood further improved its defensive capabilities. A small arched doorway led from the southern courtyard into the walled formal garden and was thus safe from assault as long as the garden wall was held. Lastly, but very significantly, there was a fourth point of access via a single wooden door in the west wall, which allowed pedestrian access from the lane and adjoining kitchen gardens running down that side of the complex into a barn, from which there was direct access to the southern courtyard. Outside of this walled enclosure, to the east, stood a large orchard bordered by thick, almost impenetrable hedges and to the south, a large wood which completely restricted the view of the chateau complex from that direction making aimed artillery fire impossible from the main French position. The wood ended a full thirty yards from the walls of the formal garden, leaving a corridor of open ground which was to become a veritable killing ground during the battle. 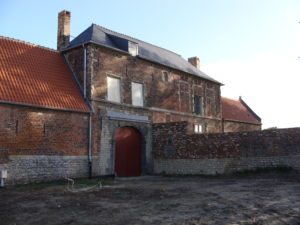 The chateau complex formed a salient jutting out from the right wing of Wellington’s line and protected his right and right rear from a turning movement through the low lying land in front of Braine l’Alleud and also restricted the enemy’s ability to attack the main ridge on an extensive front without suffering severely from heavy flank fire from Hougoumont.

Around 6 p.m. on the evening of 17 June, as the last remnants of the army arrived into Wellington’s chosen position in front of Mont St. Jean after its retreat from Quatre Bras, General Cooke, commanding the 1st Division, consisting of the four Guards battalions, was ordered to send the light companies from each of these battalions to occupy the chateau and its environs and prepare it for defence. On arrival at the complex at about 7 p.m. the four companies of Guards under the overall command of Colonel Macdonell, found a few French infantry and cavalry investigating the complex, most likely with a view to plunder rather than occupancy, and were easily chased off. The farmer had already fled but the Guards did find the gardener, one Guillaume van Cutsem, although his subsequent claims to have remained during much of the battle and survived unscathed appear doubtful. 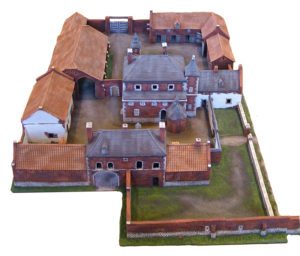 From the evidence of Major Baring who commanded at La Haye Sainte, the pioneers of the King’s German Legion were also sent to the farm to prepare the defences, and given the work of preparing firing steps, barricades and loopholes which required some skill, it seems most likely that they did, but it is a fact that no one else mentions their presence there. Low firing steps were prepared of stone or wood to allow the defenders to raise themselves over the six foot high wall to fire whilst being able to step down into cover when vulnerable as they reloaded, loopholes were gouged out of the wall which further increased the density of fire and stockpiles of ammunition were arranged in the gardener’s house. The southern gate was barricaded internally with heavy logs and any handy farm implements and other paraphernalia; the north gate was left free to allow access for reinforcements and re-supply, for ease of communication with the troops on the ridge behind and almost certainly as an escape route if things should go wrong. 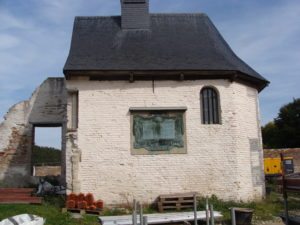 On the morning of the 18 June, the Prince of Orange decided to reinforce the Hougoumont area before the fighting commenced. Count Kielmansegge supplied the 1st company of the Hanoverian Field Jagers (sharpshooters) of one hundred men and one hundred rifle armed men from each of the Luneburg and Grubenhagen Hanoverian battalions, these three hundred men were all pushed into the orchard. With such a sizeable reinforcement, Saltoun was ordered to return to the ridge with his two light companies. On route, Saltoun met Wellington who was not aware of his withdrawal and ordered him to halt where he was, however hearing nothing further, he eventually continued to rejoin his brigade.

Wellington proceeded to inspect the defences of Hougoumont, ordering the light company of the Coldstream and 3rd Guards to the west of the farm covering the haystack and lane; and ordering the Nassau and Hanoverian troops into the wood. At 9 a.m. the 1st Battalion of the 2nd Nassau Regiment commanded by Major Büsgen, totalling 800 men in six companies, had been ordered from the extreme left wing of the army over to Hougoumont. It took some time to march across the face of the whole army and on arrival just after 10 a.m. Büsgen placed three companies, totalling four hundred men, in the orchard and three companies within the farm complex, which he found empty but prepared for defence, the light companies of the Coldstream and 3rd Guards having previously moved into the western lane area. The Grenadier company of the Nassau battalion occupied the gardener’s house and guarded the south gate, planting their colour defiantly on the rooftop, the other two companies lined the garden wall. Part of the light company of the Coldstream Guards continued to hold the buildings of the lower courtyard and defended the north gate. 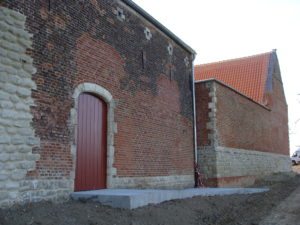 A Tale of Three Pictures