A Tale of Three Pictures

The site of the presumed mass grave just south of the south gate at Hougoumont has recently been investigated by Waterloo Uncovered, but no mass grave was found, only a single finger bone found, and no evidence of a mass grave having been cut and refilled later after the bones were removed for fertiliser.

How did this happen? How were we hoodwinked into believing this? The following three images made soon after the battle can probably explain how the myth came about.

Denis Dighton, artist, was sent by the Prince Regent to Waterloo in 1815 to record the scenes for him soon after the battle. Here Denis drew the south gate, clearly showing the damage to the roof, but shows no burial parties or indeed any disturbed ground or mound in the foreground indicating a mass grave.

In 1816/17, another artist, Rowse was commissioned to draw the sites of Waterloo and he drew the same scene, but added a scene showing a mass burning in front of the south gate, rather than a burial. He could not have witnessed this, but may have heard from farmers of such scenes or simply invented it. 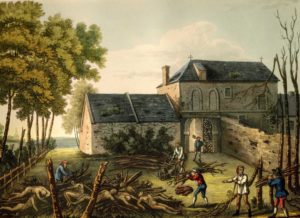 When Denis Dighton then in the 1820’s made up his original sketches into paintings, he reworked his scene at the south gate, introducing a mass burial, which he certainly had not witnessed in 1815. It is quite possible that he had viewed Rowse’s version and used it to populate the scene. 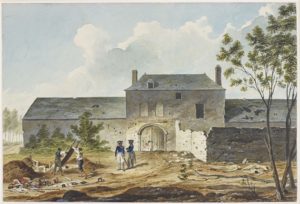 This is probably why we have believed this to be the location of the mass grave, until it was recently proven to be a myth!