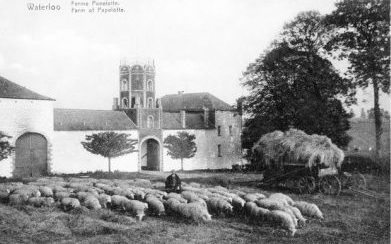 Wellington’s left wing rested on the shallow valley of the Lasne brook which ran some 800 yards in front of the allied ridge. The troops in this area were led by the Prince of Saxe Weimar, who commanded the 2nd Brigade of the 2nd Netherlands Infantry Division. Saxe Weimar had just over three thousand troops to defend this sector consisting of the 2nd and 3rd battalions of the 2nd Nassau Regiment (the 1st Battalion under Busgen being at Hougoumont) and the two battalions of the 28th Orange Nassau Regiment.

These troops were to defend a low lying area of isolated houses and strong farm complexes, sunken lanes and numerous hedge lines, a dangerous country to capture, being a very defendable terrain. At the western approach to the valley, where it was quite narrow and steep sided, stood the rectangular farm complex of Papelotte; further to the east, the small cluster of houses of  La Haye village led to the larger village of Smohain which lay in a much broader shallow valley. To the south of Smohain on the crest of the ridge overlooking this valley, stood the Chateau of Frichermont owned by one Monsieur Beaulieu.

This area formed the left flank of Wellington’s position and was doubly important in both preventing French flanking movements against the allied left wing and forming the point of contact with the Prussian forces which were expected from the direction of Ohain. Saxe Weimar spread his troops across a wide area to maintain control of all of these defensive positions if at all possible. The 1st Battalion 28th Orange Nassau were placed south of the Lasne, two companies holding the houses of Smohain on that side of the river and the other four garrisoning Frichermont. The 2nd Battalion 28th Orange Nassau lined the houses of Smohain to the north of the river and the village of La Haye. Papelotte was held by one company of the 3rd Battalion of the 2nd Nassau, with the remainder of the two battalions of this regiment placed on the forward slope of the ridge behind, alongside the lane running down to Papelotte. He placed Bijleveld’s four cannon just to their left and Stevenaar’s two cannon on the crest above Smohain where both could support the Nassau troops in the valley below.

The French initially appeared to show little interest in this sector, simply deploying light cavalry to observe them. However following the severe bombardment of the allied ridge from the batteries and with the advance of d’Erlon’s troops against the allied left wing, the column on the right flank under General Durutte had marched towards the crest in front of Best’s troops. However, on the retreat of this corps, Durutte split his force into two brigade columns, the first covering the cannon, whilst the second brigade marched upon Papelotte. This brigade, consisting of two battalions each of the 85th and 95th Ligne Regiment, totalled only just over seventeen hundred men, a small force with which to oust the Nassau troops from such strong defensive positions. This force also sent out a strong screen of skirmishers against all four of these major defensive positions in the valley from Papelotte to Frichermont all together, further watering down the strength of their attack.

The French infantry did however manage to force the Nassau troops out of at least part of the Papelotte building complex but were unable to take control of the buildings completely, thereby both sides claiming the  victory. The arrival of four more companies from the ridge allowed the Nassau troops to regain complete control, although a fire took hold in one wing.  A fourteen year old drummer recalled the troop’s desperate need for ammunition at one stage:

About three o’clock, the ammunition started to run out, but, … I took off my belts and ran through the firing line to the English troops standing in the rear [Best’s Troops] who filled my big bread bag with cartridges. After I had distributed this load, I went back a second time. On the way back, I was hit in the right hip by a ricochet… but that did not stop me going a third time.

Around 4 p.m. a large column of French infantry advanced on Frichermont forcing the Nassau defenders to vacate the farm after some heavy skirmishing and to retire on Smohain village.

Soon after 6 p.m. the advance guard of General Bulow’s Prussian corps arrived behind Saxe Weimar’s men and initially mistook the Nassau troops for Frenchmen. A number of infantry were killed or wounded on both sides before the error became apparent and the firing was stopped. Bulow’s troops recaptured Frichermont from the French and marched on towards Plancenoit where they were to encounter much stiffer opposition.