The Battle
What's New
By Gareth Glover / 3 years ago

When visiting Waterloo many often find time to visit the Wellington Museum (recently undergoing a major improvement scheme) and St Joseph’s church across the road, but most do not realise that another little gem sits just yards away – the house where Uxbridge had his leg cut off!! 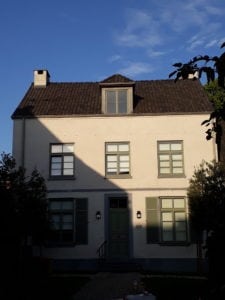 On the same side of the road as St Joseph’s and about 8 buildings north of the crossroads, there is an ornamental gateway with a garden and this property set back some yards from the road. This was the house of the Paris family, where Uxbridge found himself returning that night and where he underwent amputation of his leg on the kitchen table, which the Paris’s would show to visitors (never having cleaned the blood off) for a fee. The Leg was buried in the garden and a bush planted over it and Uxbridge eventually had a memorial placed over it! (The stone inscription is now in the garden of Wellington’s headquarters).

Years later during a storm, the bush was uprooted and the bones exposed and put on display. The then current Lord Anglesey found out and a major diplomatic incident evolved and eventually the Paris family agreed to have it re-buried.

However, the story has a final twist. Apparently when the last Mr Paris died in the 1930’s, it is said that his widow discovered the leg bones labelled up as Uxbridge’s in his desk! She apparently panicked, knowing all about the previous furore and had the bones thrown into the furnace of her heating system!!

Whatever the truth, the house (now a private residence with no access) is fully refurbished and is not to be missed when visiting Waterloo!