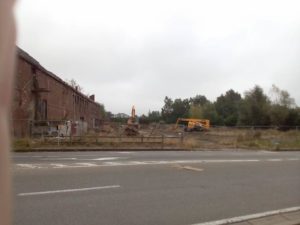 It is with great sadness, that we have just learnt that the eight-year battle to save the great farm at the crossroads of Quatre Bras has failed and as the picture shows, the bulldozers are already starting the destruction. The farm acted as a major hospital during and after the battle and as such was the scene of some terrible sights. It has been abandoned for many years, but as the last remaining original building, it was hoped that it could be re-used.

But it is not to be, the Quatre Bras battlefield is now bereft of any original features and visitors can only visit the few memorials placed near the crossroads.

It is such a pity, in such an enlightened age, that we can still let such historically important sites be lost forever.

No related posts for this content
About the author

Such a sad story. To think that this structure survived two world wars but could not escape the incompetence of government bafoons and the developer’s greed.

I hope those responsible for the loss of these unique farm buildings are haunted for the rest of their lives for destroying such an important European heritage. Surely the building could have found a new use without having to be destroyed. Some of the material should be stored for use to maintain similar buildings on the “Waterloo” Battlefield site.

Having just come to this website, I have no idea what McCollum and Yorke are writing about. Could someone explain, please?

Hi Stuart
The great farmhouse that stood at the crossroads of Quatre Bras was a major feature in this battle on the 16th June 1815 (two days before Waterloo) and it served as a casualty centre on the day. It has been abandoned for some years, but rather than renovate the buildings and give them a new lease of life, the ocal Belgian authorities have bulldozed it and we have lost a major site regarding this battle. Gareth